From Climate Litigation
Jump to navigation Jump to search 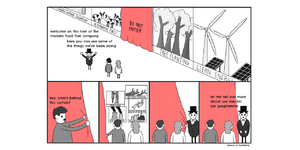 A cartoon demonstrating the practice of greenwashing

Greenwashing is a form of deceptive marketing in which a company is falsely or excessively promoted as being environmentally friendly.[1] The fossil fuel industry has a history of running public disinformation campaigns and has lobbied against efforts to address climate change for decades. Therefore, it is not a surprise that fossil fuel companies continue to try to mislead the public by running ads that greatly exaggerate the degree to which they are investing in clean forms of energy, while in reality the vast majority of their investment goes to increasing fossil fuel production.[1]

Luckily, there are rules against false and misleading advertising. If you see an advertisement by a carbon major like ExxonMobil, Chevron, BP, or Shell touting the companies “green” and clean energy initiatives, get in touch with an organization that has experience litigating greenwashing cases.

Greenwashing complaints are the low-hanging fruit of the climate litigation world: most are resolved before making it to court. “Greenwashing complaints are cheaper, faster, and more successful at raising awareness among the general public, so they’re very clever.” “Liability cases can go on for decades and get incredibly complicated, whereas it’s easy for people to connect to the concept of being cheated.”[2]

Note: This is part of a series on arguments that can be used in climate litigation. For more articles in this series, see the arguments series.

For another great resource on this topic, check out the Action 4 Justice Climate Litigation Guide

Organizations that have brought greenwashing cases[edit]

Retrieved from "https://climatelitigation.miraheze.org/w/index.php?title=Arguments_Used_to_Sue_Corporations_for_Greenwashing&oldid=2875"
Category:
Cookies help us deliver our services. By using our services, you agree to our use of cookies.